The American Diet: What Happened? 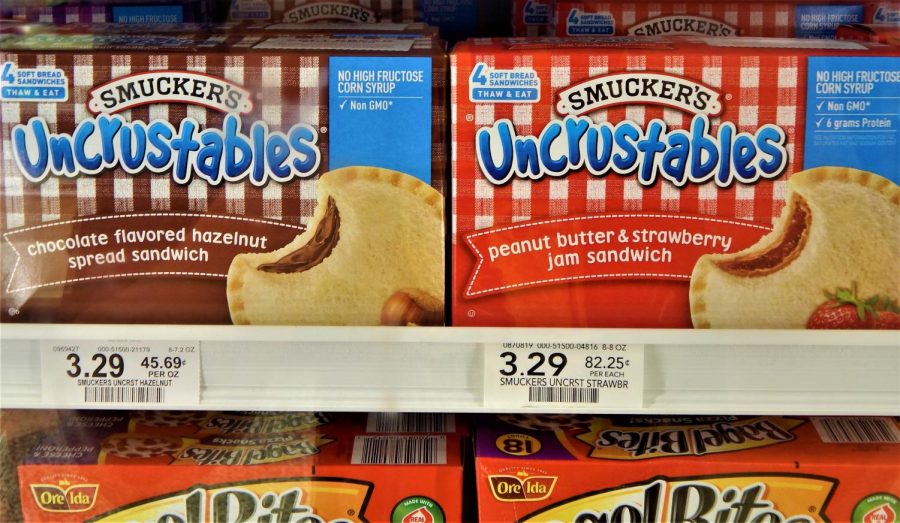 A comparison between two kinds of Smucker's Crustables sandwiches in the frozen foods aisle at Publix highlights their differences. While the PB & J packaging proudly mentions its nutrition facts, the chocolate hazelnut sandwiches does not. (Photo Credit: Ava Rose Weisberg)

Hundreds of years ago, eating was an entirely different matter than it is today. During the Paleolithic Age, people were forced to hunt and gather their own food, leading to a society of nomadic humans whose diet largely consisted of raw vegetation supplemented with whatever game they could hunt. Over time, in the Neolithic age, humans became farmers. Food grew in their own backyards and animals were domesticated and raised for slaughter- people became civilized, comfortable, and food became more accessible. Since humans didn’t have to spend their every waking moment in search of food or shelter, they began to create art, learn science, and invent things. With these inventions came new innovations that made food even more accessible than ever before. Preservative methods, such as salting, cooling, and eventually injecting it with chemicals made food last longer. Trading, village markets, and later, supermarkets, meant that people no longer had to eat food that they had grown or hunted themselves. Humanity’s many advancements made food easier to come by, and it gave people the choice to eat what and how much they wanted and not just whatever was available. Great, right? In some ways, yes. However, some people have chosen to go back to the Paleo diet from thousands of years ago despite all of this, and the reason is that they are remembering what America’s food industry has happily forgotten: how to eat healthily.

The average American diet is incredibly unhealthy. This is blatantly obvious from an outsider’s perspective, but Americans themselves have grown so accustomed to ingesting the same health-depleting foodstuffs every day that they are completely ignorant of their dietary mistakes. A few things that Americans are guilty of include huge food portions (visit the UK for some contrast), the ingestion of extensively genetically engineered foodstuffs (take Hostess’s Ding Dongs, for instance, that have a shelf life of nine years), and neglecting to eat certain food groups that are necessary to keep one healthy, such as vegetables or proteins. In short, Americans eat too much of the wrong things. In the country’s defense, people are eating what is most available to them. It isn’t their fault that Publix is loaded with multiple aisles and tables for cookies and pastries, and only one section for vegetables, and if you work minimum wage, it’s much cheaper to eat a cheeseburger from McDonald’s then a Caesar Salad from The Capital Grille. So, while Americans aren’t totally incapable of eating healthier, there are many obstacles in their way, such as availability and higher prices for healthier foods.

The food distributing company Smucker’s is an excellent example of how food has changed to cater to what people might want to eat rather than what they should be eating. Smucker’s strategy has worked because many Americans are more concerned with how something will taste than what its ingredients are. What exactly did they do? Well, one example of how Smucker’s has adapted to their clients’ wants rather than needs is through Smucker’s Uncrustables, as depicted above. Originally, Smucker’s Uncrustables manufactured solely peanut butter and jam sandwiches, frozen and plastic-wrapped for convenience. While PB & J isn’t the most healthy lunch, Smucker’s has taken strides to make it look healthier and make customers feel better about eating it. The packaging of Smucker’s Uncrustables reads ‘No high fructose corn syrup’, ‘Non-GMO’, and ‘six grams of protein.’ It also encourages buyers to ‘see nutrition information for fat, saturated fat, and sodium content.’ This shows that Smucker’s isn’t afraid for people to know what’s in their sandwiches, leading customers to believe that they are buying healthy food. Later, Smucker’s came out with a new sandwich with chocolate-flavored hazelnut spread that they are also marketing as a lunch food. They have attempted to make this meal look healthier by including a photo of a hazelnut rather than chocolate on the packaging. However, while the chocolate-flavored hazelnut spread Uncrustables are marketed as lunch sandwiches right along with PB & J, they have lost what little nutrition value the PB & Js actually did have. You will notice that chocolate Uncrustables packaging does not say ‘six grams of protein,’ nor does it encourage you to see the nutrition information. Smucker’s Uncrustables is just one example of many companies who are slowly adding sugar and removing essentials from their food to appeal to customers’ cravings, and they are all benefitting greatly from it. Cereal companies are doing the same thing, the change most prevalent through all the cereal brands being a turn to chocolate. Chocolate is beginning to coat every snack, yogurt flavors are turning to M&M’s, cheesecake, and apple pie, and cheese on bread is now considered a typical dinner for Americans. Simultaneously, food is presented to sound healthier, with packaging that boasts ‘Good source of Vitamin C’ or ‘Vegan’.

All the changes that are occurring within the food industry have caused Americans to view their diets as acceptable. It’s okay to them to drink Coca-Cola every day so long as it’s sugar-free, and they see no issue with eating cake for breakfast as long as it was made in a pan and served with a side of fruit. This is what they were taught is acceptable, this is what they’ve been doing, and this is what they like, so they feel no urge to change. Still, they can’t ignore the fact that obesity rates are going up and that they are putting themselves at a high risk for diabetes. There are rules within the food industry to ensure that food distributed is safe to eat, but this isn’t enough to actually ensure the safety of consumers. Recommended portion sizes for foods do not control how much customers are going to consume, and oftentimes the portion sizes recommended are unrealistically small, to make the sugar content appear less. In short, the laws established by the USDA concerning food distributors aren’t enough to make people eat healthier. Health something that they- and that you and I- have to choose. Since the food industry is not going to make any good decisions concerning our health for us, what are we going to do?

One serving/cup of Lucky Charms contains 12.6 grams of sugar. However, including the sugar content in the milk that it is eaten with, there is another twelve grams on top of that, equalling 24.6. If someone were to later eat a Smucker’s Uncrustable (the chocolate one) they would be consuming another twelve grams. If they ate a cheeseburger from McDonald’s with McDonald’s fries for dinner, that would be another 28 grams. The total sugar they would have consumed that day would be 65 grams, and if this is their daily diet,  52 pounds of sugar a year, as opposed to the recommended five. This doesn’t even account for someone drinking a liter of Coca-Cola per week, which would add another 11,054 grams of sugar to their yearly consumption, totaling 76 pounds of sugar a year. Suddenly, the statistics for sugar consumption become more believable, don’t they?

So, how can someone consume less sugar every year? The easiest way is to substitute the foods that are highest in sugar with foods that have less. For instance, eating hot cereal for breakfast instead of cold cereal, or drinking more water and less soda. Another good thing to do is to substitute PB & J sandwiches with meat sandwiches, which have much more than the ‘six grams of protein’ that Smucker’s likes to boast, and far less sugar. Even further, replace white bread with wheat bread. There are likely many ways that you can improve your diet, and after reading this article, I hope you are encouraged to do so. So again, be conscious of how much sugar you consume. Read the nutrition labels on food, even if the packaging does not encourage you to do so. After all, it would be nice to know that I haven’t stood in the middle of a Publix frozen foods aisle, taking close-up photos of ready-to-thaw PB & J sandwiches, with a DSLR Canon, as Publix employees and afternoon grocery shoppers shot me confused looks and sideways glances, all for nothing.