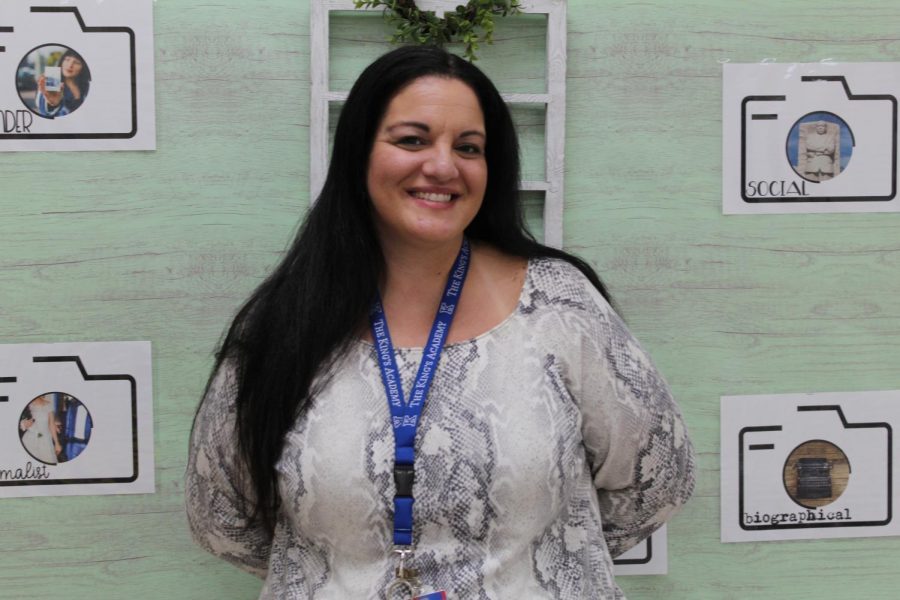 Senior English teacher, Mrs. Espina, begins her sixteenth year of teaching at The King's Academy. King's is only her second school to teach at in her teaching career. (Photo Credit: Kate Wallace)

The King’s Academy is pleased to introduce Mrs. Espnia,  a new English teacher with sixteen years of experience. She has strived for excellence and has known she wanted to be a teacher since third grade when her teacher let her help put stickers on papers and help her around the classroom. She carried this love of teaching through her years of school, finally graduating from Florida Atlantic University and beginning her teaching journey.

This week in schools all around the country English teachers are teaching about banned book week. Banned book week is “an annual awareness campaign promoted by the American Library Association and Amnesty International, that celebrates the freedom to read, draws attention to banned and challenged books, and highlights persecuted individuals”. Books have been banned throughout history. In America reading a banned book would lead to fines or punishments by the government. Since then the banning of books in America has changed. The books are prohibited to be in schools, shielding students from certain topics like racism or sexually explicit content. This can be seen as good and protecting children from hard topics, but Ms. Espnia and many other English teachers have different viewpoints.

Ms. Espnia explains how banning books can be harmful “banning books from schools, removes them from teacher’s bookshelves, meaning that a student who needs the story wouldn’t have access to it”. She speaks on how every story can relate to a person and get them through their current trials. Each year she reads a different banned book, this year she is reading “I know why the caged bird sings”. The preface of the book is written by Orpah Winfrey, and she speaks on how she wishes she had read the book as a child. Oprah was raped when she was young and believed that the story from “I Know Why the Caged Bird Sings” would help her younger self. The story was banned because the main character was raped, and schools deemed it inappropriate. Ms. Espnia believes that reading banned books is crucial to people feeling represented and feels that censorship erases the truth of the time period.