Band Aid and U.S.A. for Africa – How Celebrity Activism Can Raise Global Awareness for Global and Domestic Issuess. 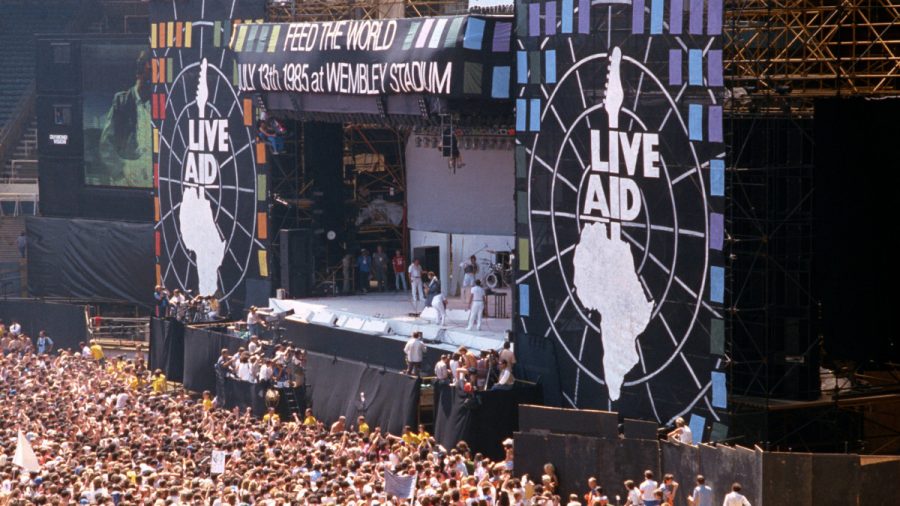 In June of 1985, the most popular British and Irish singers and performers of the time came together to create arguably one of the most famous concerts of all time, the Live Aid benefit concert. Not only did this concert serve as a cultural landmark, but it also exemplified the possibilities of celebrity activism.
After a historic Civil War left Ethiopia’s economy in shambles. Civil and political unrest left the country with a lack of direction and in need of outside assistance. On top of all this, a famine was predicted to be hitting the already struggling country. The famine left thousands of Ethiopians at threat of dying of starvation as well as thousands who had already passed away. Ethiopia was in desperate need of financial help, but the lack of coverage on the famine was not improving the countries situation.
It wasn’t far after this that Michael Buerk aired one of the most famous BBC broadcasts covering what was then coined as a “biblical famine”. The broadcast was a success in regard to raising awareness for the crisis happening in Ethiopia. One viewer of this broadcast was none other than the performer, Bob Geldof, who began formulating a plan to raise money for a relief fund. Band-Aid, a band comprised of the most famous British and Irish singers, was created along with the song “Do They Know It’s Christmas”. The song was wildly successful and broke many records within its first weeks of release.
Eventually, an American version of Band-Aid was formed under the name U.S.A. for Africa. This band had the same concept as its overseas counterpart, so they needed their own song. “We Are the World” was released and, similarly to “Do They Know It’s Christmas”, it broke records and succeeded in raising more awareness for the famine in Africa. Money from record sales was all flowing in, but Geldof wasn’t done just yet. He planned a concert that would be the ultimate fundraising opportunity.
The Live Aid benefit concert took place on July 13, 1985, and was one of the final installments in raising money for relief funds. The concert not only had an in-person audience of around 72,000 people in London and around 100,000 in Philadelphia, but it also had over 1 billion viewers tuning in on their televisions in 110 countries. The event itself raised over 125 billion dollars in order to aid Ethiopia in recovery.
Although Geldof’s fundraising efforts were all of good intention, not everything went as smoothly as it was reported. Not only did a good portion of the money never even reach Ethiopia or its relief efforts, but the events themselves failed to put focus on Ethiopia. The U.S. and Great Britain, which were already the center of most global attention, continued to remain the center of attention along with their celebrities. However, I believe that the flaws of this fundraising effort do not outweigh the positives. I also believe that if done properly, the Bob Geldof template could be properly altered to be extremely successful.
The concept of celebrity activism is a relatively new one. Up until the Live Aid concert and its musical predecessors, it had never been seen on such a large scale. Despite the flaws of this event, it was able to prove one vital thing, celebrities draw attention and if utilized properly public attention can be drawn to the right things at the right time. Basic sociology should tell you that using celebrities will always garner more attention from the public, so fundraising companies would highly benefit from recruiting celebrities to market for their respective causes.