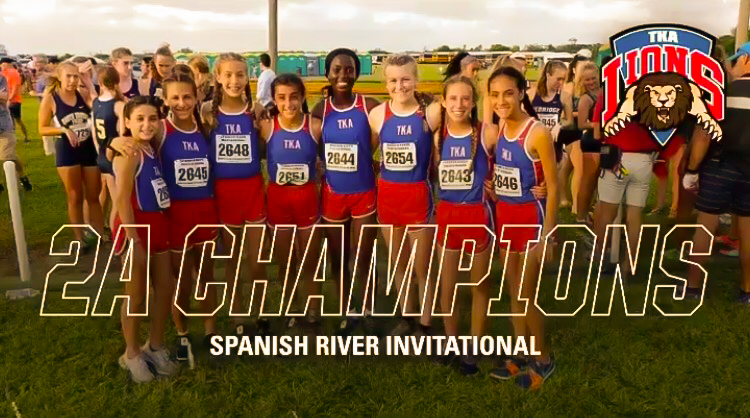 The first student I interviewed is Tindi Awinyo from the Class of 2022. Tindi was born in Kenya, but she moved to Dubai four years ago (where she attended Kent College as an international student) before moving again to America and enrolling as a sophomore at TKA. Why TKA, when there were so many other schools to choose from?

“Sports,” says Tindi, “The school was recommended to me by Wilfred Odero; he’s an Athletic Prefect. So, [my family and I] researched the school and it had everything we were looking for.”

Tindi is very sport-minded. Just this year she joined the Girls’ Varsity Cross Country team, which she takes very seriously, even improving her diet to better her performance. She had lots of good things to say about the athletic program.

“The program is very challenging and keeps you fit,” says Tindi, “and my coach, Coach Mitchell, is the best running coach I’ve ever had.” Tindi continued to say how much she enjoyed the Girls’ Weight Training program as well. She also pointed out to me that the lunch program at TKA improved the sports program as well, as the food was healthier.

Speaking of food, one of the topics that came up in my interview with Tindi was just that. If you’ve ever traveled then you probably noticed that popular and common foods are very different from country to country. Moving to America, Tindi noticed this as well.

“Like, every turn on the road I see another Dunkin’ Donuts!” Tindi remarks. She went on to ask me if she should go there, being as the place seemed very popular in America, to which I replied that while Dunkin’ Donuts was all fine and dandy, the superior donuts live at Jupiter Donuts, to which few who have been to both places can disagree.

While we were on the topic of food, I decided to ask Tindi if there were any popular meals or snacks in America that she didn’t understand or thought were gross. Her answer was immediate.

“Chewing ice,” Tindi replies, “I don’t understand it. Literally, my house family will go to the fridge and get a cup of ice and just start eating it. I’m like, just get a cup of water.” After a brief pause, Tindi theorized, “It’s from guilt. Guilt about all the donuts.”

On the other hand, there is one American snack that Tindi has fallen in love with, and that is Nutri-Grain bars.

“They are literally the best thing,” Tindi told me in photography class, “After I tried some I went to the grocery store and was like, I’m gonna get some.”

Finally, I asked Tindi what her favorite thing about TKA was. To which she replied, the amazing people. This includes all her friends, teachers,  her host family, the Millers, who she speaks very highly of, and of course, me.

The second student I interviewed is Jasmine Cao from the Class of 2023. Jasmine moved from Vietnam to America to attend The King’s Academy two years ago. Jasmine started learning English in elementary, dropped the subject, and picked it back up again later in middle school. Because of this, she was able to enroll in TKA to get a better education.

“My parents recommended that I go to a school in America because the schools are good,” says Jasmine. “After I researched it, I decided to go.”

Despite the fact that Jasmine goes to King’s to excel in her academics, there is so much more than just mathematics, history, and English that she has learned there. One very touching thing she told me was how much she learned to empathize with others through, of all things, Key Club.

For those of you that don’t know, one of the responsibilities of Key Club members is emptying the recycling bins around campus. Instead of being bitter about the fact that her fellow classmates left behind decaying food items for her to clean up after school in the hallway recycling bins, as I would’ve, Jasmine used this as an opportunity to empathize with others who were given similar trash duties. It is my hope that by reading this, people begin to realize that more often than not the unwanted trash items that they carelessly discard around campus are cleaned up by their friends, and as a consequence, I hope these people become more considerate about where they discard their items.

On the subject of difficult duties, I decided to ask Jasmine what the hardest part about being an international student was.

“The hardest part obviously is the English,” says Jasmine, “If students here only need to try one hundred percent, then we need to try two hundred percent because there is a lot of vocabulary, writing, and speaking involved, and we have to try to understand the teacher.”

This is a very valid point. To better understand how difficult it is to be an international student, think of any foreign language classes you have taken in the past or are currently taking. Maybe for you, this is a Spanish class. Have you ever stared stupidly at your teacher while she asks you a simple question in Spanish, confounded? Or if you have a difficult time grasping the concept of things like stem-changing verbs, imagine taking an entire Physics course in a foreign language, or an AP History course.

Finally, I decided to ask her about food. What’s the difference between food in America and food in Vietnam?

“How everything tastes here is different,” says Jasmine, “In my country, we like salty and sweet. Here, it’s just sweet, and super salty, too.”

Despite all the new and exciting foods a person can encounter in a foreign country, sometimes at the end of the day, nothing beats a traditional home-cooked meal. That’s another difficult part about being international, leaving behind your culture.

After reading this article, I encourage you to make an effort to say hello to an international student the next chance you get. These students are some of the most amazing people you may ever meet, and even if you don’t end up becoming best friends, as any new kid at TKA can tell you, it always pays to make an effort to say hello. You never know if a simple wave could spark a life-long friendship with someone from all the way across the globe.