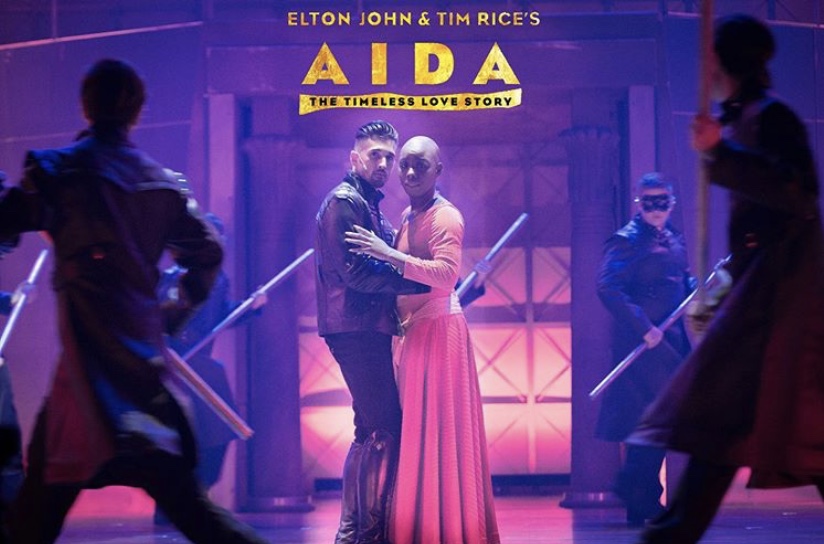 Radames (Luke Barry) and Aida (Brittany Wallace) fight for their right to love each other in the midst of political and emotional turmoil.

Fortune favors the brave. Aida, the musical, has premiered on The King’s Academy stage on numerous occasions. However, this time it was different. As the scrim rose and the stage lights illuminated the stage, we were greeted with the familiar faces of the TKA alumni. The graduates returned to the stage to play the shows most famous roles. Brittany Wallace played the role of “Aida” Luke Berry playing, “Radames”, and Tess Soltau played, “Amneris”. Written by Elton John himself and composed by Disney’s Tim Rice. Originally written by Giuseppe Verdi as an opera, Disney’s newly adapted version can only be described in 2 words: rock opera.

Our alumni aren’t just familiar faces to our TKA family, but also to faces all across the world. Brittany Wallace has traveled across the world on a Norwegian Cruise Line, acting as entertainment for the passengers on board and booking numerous auditions in New York. Tess Soltau is a Broadway professional. She played the bubbly Glinda to the grunge Wednesday Adams, and a myriad of other projects.

If one thing that can be learned from working with experienced professionals, it is that you can always challenge yourself to grow. Seeing these alumni has not only inspired The King’s Academy Theatre Company to work harder, but  has also raised the bar of excellence. Upon witnessing Brittany and Tess work and sing their hearts out every night, it can be observed that performing isn’t just about belting a note, but it’s about genuine storytelling. And genuine storytelling is exactly what these alumni portrayed. Every performer told a great story, but watching them really helps individuals reflect on their future and where they can be in several years. Storytelling is one of the key factors of a remarkable performer and these alumni were the perfect example.